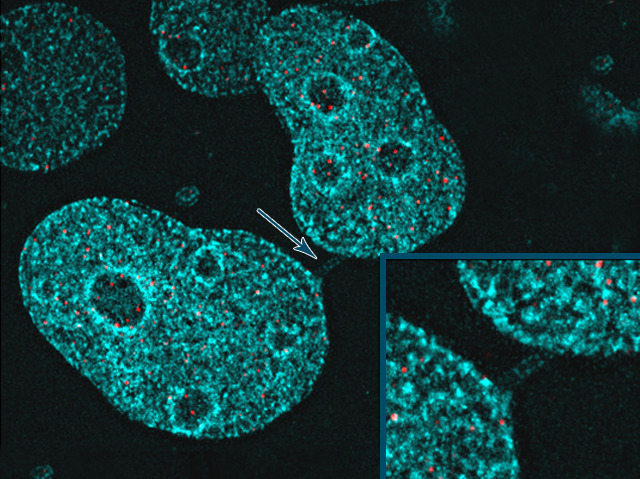 Hodgkin’s lymphoma, a cancer affecting lymph nodes [glands], develops from faulty division of white blood cells. Sometimes the cancerous cells are very large and, instead of having the usual single nucleus [home to chromosomes], they have many (each large blue shape pictured). These giants are known as Reed-Sternberg cells. Making use of the latest 3D imaging techniques, scientists tracked a pair of chromosomes in such a cell and saw that they became increasingly out of position as the cell divided and multiplied. The arrow points to (magnified in the boxed area) a chromosome that is bridging two nuclei inside a Reed-Sternberg cell. This highly irregular situation illustrates just how chaotic the cell has become. The study may provide insight for developing new treatments for Hodgkin’s lymphoma, building on advances that have raised the survival rate in recent years to around 85 per cent in the developed world.