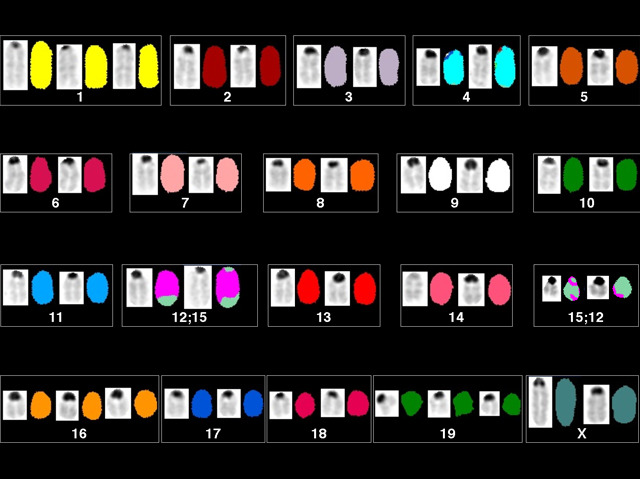 Our cells each have 23 pairs of chromosomes - lengths of DNA where genes are arranged like books on a bookshelf waiting to be read. Mice usually have 20 pairs, but in this picture cancer has caused some dramatic rearrangements. Using a technique called spectral karyotyping, chromosomes are grouped in different colours (each chromosome is seen here as a coloured blob and as a black and white image). Instead of the ordered pairs we would expect, this tumour has developed three copies of chromosomes 1, 16 and 19, while chromosomes 12 (pink) and 15 (light green) have merged together. Merging or translocation of chromosomes happens in human cancers too. In cases of Burkitt’s lymphoma, genes from chromosomes 8 and 14 fuse together, driving cells to reproduce too quickly. Discovering which genes are affected by translocation has already influenced new, targeted cancer therapies.