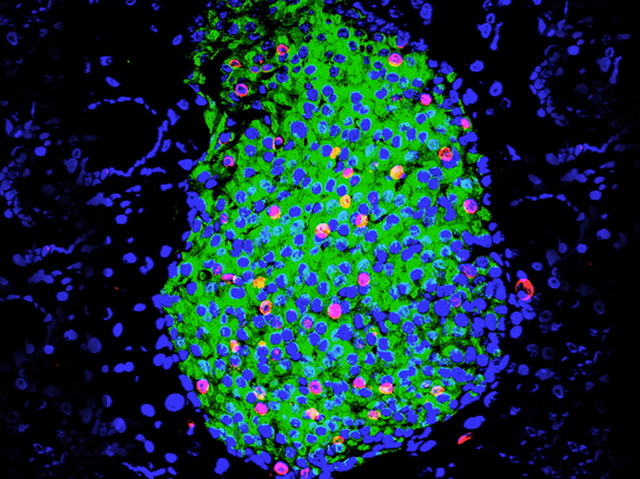 Estimated to affect over 170 million people worldwide, diabetes is a major modern-day health concern. Caused by failure to regulate blood sugar, this disease arises because of defects in the production of insulin, a hormone that acts to decrease the levels of glucose in the blood, or in the way other tissues respond to it. Researchers have recently identified a hormone, named betatrophin, which is secreted by liver and fat tissue, and stimulates duplication of insulin-producing cells in the pancreas. Raising the levels of betatrophin makes the pancreatic cells replicate faster, and having more of these cells means that more insulin is made. In the mouse pancreas pictured, the pink spots identify a protein characteristic of replication, thus revealing that some of the cells that produce insulin (stained green) are duplicating. Also found in humans, betatrophin could provide potential alternatives to insulin injections in the treatment of diabetes.