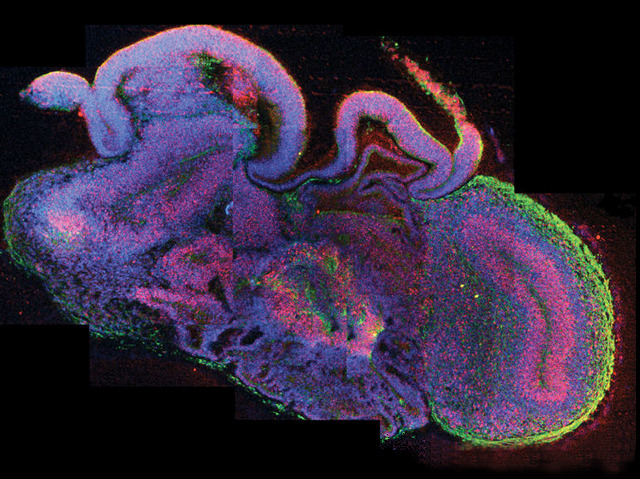 This is a cross-section of a ‘cerebral organoid’ – a lab-grown version of an embryonic human brain. Neural precursors – that become brain cells (neurons) – are highlighted in pink, and neurons in green. Researchers made these tiny brain-like structures by first bathing human induced pluripotent stem cells, which can become any cell in the body, in a cocktail of nutrients that persuade them to become neural precursors. The cells were then embedded in a gel, and later plopped into a special spinning chamber and left to grow. Over 20–30 days, the cells arranged themselves into pea-sized balls of tissue that boast some features of an adult brain. They don’t form neural networks but they do develop distinct regions, including the cerebral cortex, that generate mature neurons in the normal way. Cerebral organoids will be used to study the early development of the human brain and the neurodevelopmental disorders that disrupt it.