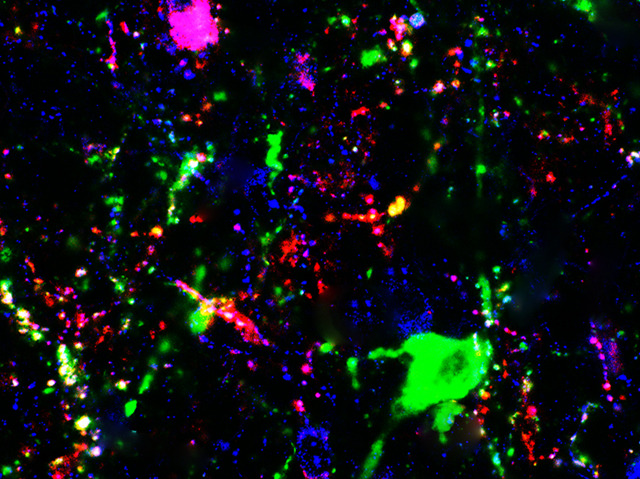 This is a colourful slice through an autopsy sample – a brain taken from an 83 year-old woman. Red, green and blue fluorescent dyes highlight different chemical ‘messages’, called neuropeptides, being sent between brains cells (neurons). Two of these messages (kisspeptin, labelled in red and neurokinin, blue) often work together (shown where their overlapping dyes produce purples splodges) to trigger bursts of gonadotropin-releasing hormone, an important regulator of fertility and reproduction. But this elderly lady’s brain had also been sending a different chemical message (substance P, coloured green) at the same time – and often from the same neurons as kisspeptin (producing yellow splodges) or neurokinin (turquoise), or even in a triple-message combo (white). Neurons carrying substance P are more plentiful in the brains of elderly women than men, suggesting it could play a vital role in ‘rewiring’ hormone regulation in the female brain during the menopause.