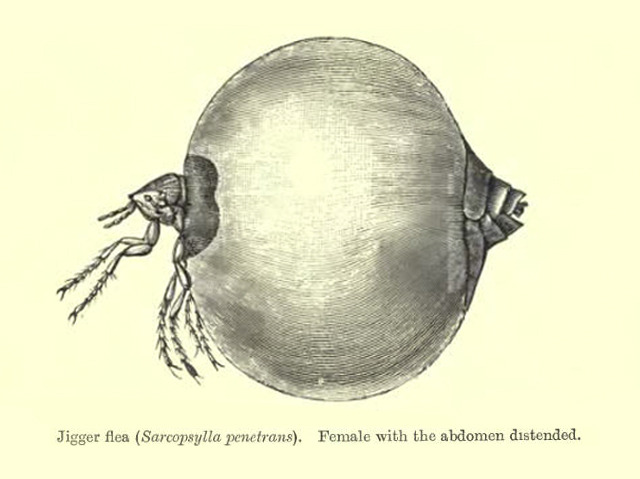 When a female jigger flea is ready to mate (such as the one in this illustration), she burrows headfirst into the exposed skin of a mammal’s foot, leaving the final cone-shaped segment of her abdomen exposed. Through this microscopic protrusion she both breathes and breeds. She stays buried in the foot, swelling with eggs, for about six weeks. Then she expels the eggs, and dies. In humans, this invasion causes a disease known as tungiasis, which is characterised by itching and skin ulcers, and can lead to infections like tetanus and gangrene. There are reports of such intense suffering that people have cut off their toes in desperation. A recently published paper urges global health organisations, like the WHO, to recognise tungiasis as a severe neglected tropical disease. It outlines effective prevention methods, including the application of a coconut oil-based repellent, which almost completely prevented jigger flea attacks in trials.