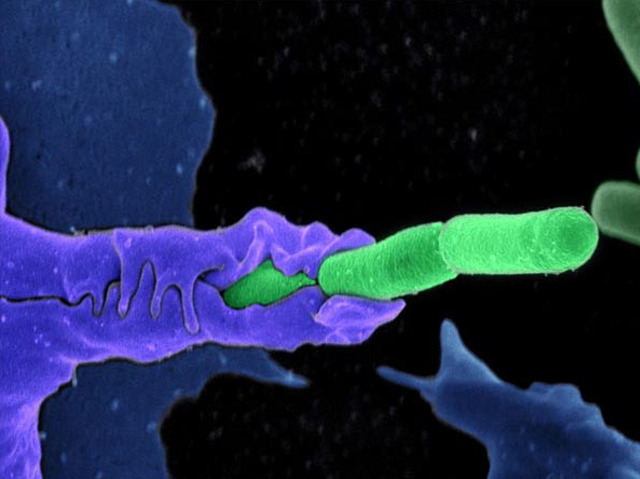 Human immune cells (coloured in blue) are swallowing up a sausage chain of anthrax-causing bacteria (green), Bacillus anthracis. This deadly germ takes its name from the Greek word for coal, anthracis, because it can cause skin to form boils that blacken when untreated. Although infections have been all but wiped out with vaccines in the twentieth century, deadly spores continue to survive inside the fabric of old buildings (where horse hair was used to bind plaster) such as in London's King's Cross train station, and as part of military arsenals for germ warfare. The unrivalled ability of anthrax to inject toxins into cells has killed thousands of people and livestock in past centuries, but could now be used to save as many. Having successfully replaced the toxic content of the bacterium with anti-cancer agents, biologists are now trialling it on mice as a potent drug delivery system targeting tumour cells.