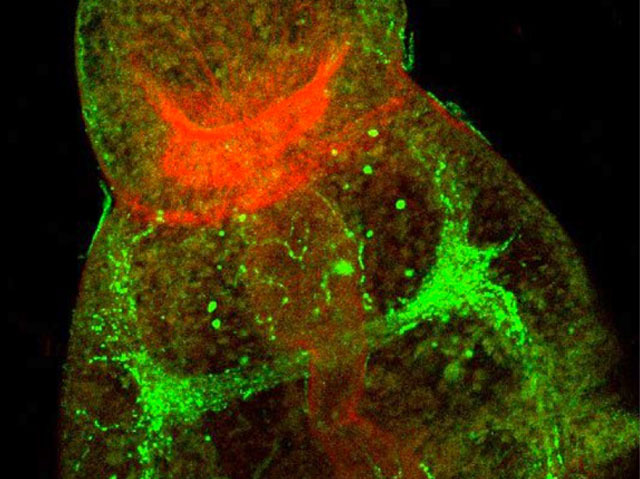 Blood flukes, officially known as Schistosoma, are parasitic flatworms that cause schistosomiasis – a debilitating disease that afflicts millions and kills roughly 200,000 people every year in sub-Saharan Africa. Fluke larvae penetrate the skin when people wash or swim in contaminated water. To mature and reproduce, they must migrate from the host’s skin to the liver and then down to the bladder, where they release eggs. Researchers knew that a hormone called serotonin controls the worm’s ability to move, and now they’ve discovered a serotonin receptor (seen here tagged bright green) on the nerve cells of a species called Schistosoma mansoni. The mouth sucker and gut muscles are shown in red. Interfering with the newly discovered receptor severely inhibited the worm’s mobility. As a result, it has become a promising target in the search for new drugs that can paralyse blood flukes and neutralise the threat they pose.