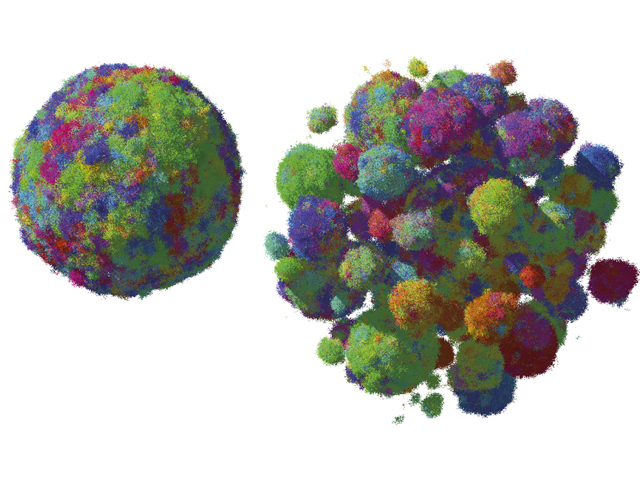 These brightly coloured balls are computer-generated tumours. Each coloured dot is a cancer cell in a simulation that holds vital clues to how real-life tumours grow. On the left, cells multiplying side-by-side have grown into a ball shape. Only the surface cells have room to divide so the tumour grows slowly. On the right, an experimental simulation allows the cells to move, finding room to grow. Cancer cells often migrate, or metastasise, between different organs or tissues. Here, the cells migrate short distances away from the original tumour, forming 'clumps' similar to those found in real-life cancers, and growing just as aggressively. As the cells divide, genetic mutations are passed from generation to generation – a speedy evolution that yields differently-coloured genetic patterns in the clumpy tumour. Tackling such genetic diversity is a challenge to chemotherapies, but these models suggest that limiting cell motility could help to slow cancer progression considerably.