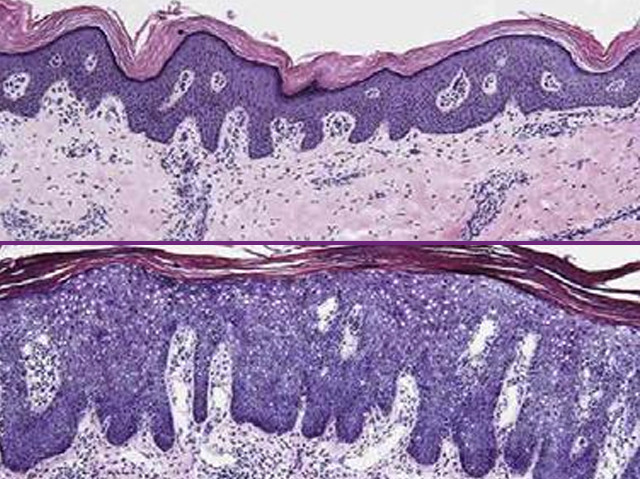 Psoriasis is a condition in which the body’s immune system malfunctions, causing excessive production of skin cells. This results in scaly red patches that are often itchy and sore. Researchers have long suspected that a cell-to-cell signaling molecule called interleukin-23 (IL23) triggers the condition. They’ve been testing therapies based on human antibodies – Y-shaped proteins used by our immune system to identify and neutralise invaders – to stop IL23 molecules binding to immune cells. Now, a trial with one antibody-based therapy has produced encouraging results: nearly all of the 31 patients who received the treatment saw dramatic improvements in their symptoms. Here we see a sample from a patient showing how the outer layer of skin, known as the epidermis thickens due to the over-production of skin cells (bottom). Eight weeks after treatment the epidermis has thinned to normal levels (top), reducing the patient’s itchiness.