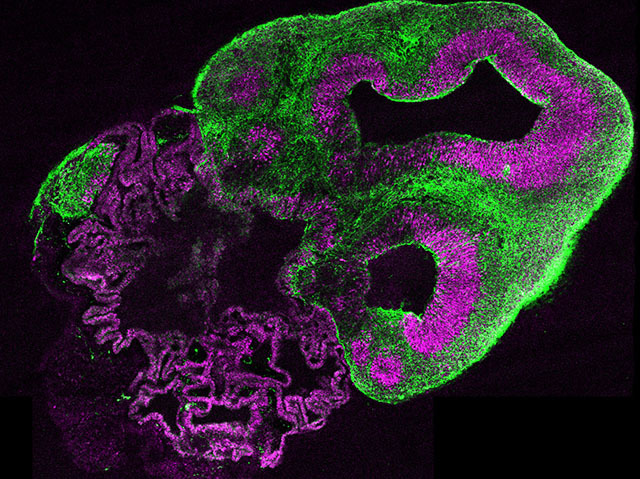 Brain in a Dish

Studying the human brain isn’t easy. It’s unethical to study living people, and the brains of mice and rats lack the complexity of our own. Madeline Lancaster developed a technique to grow ‘mini-brains’ by coaxing human stem cells to assemble into balls of brain-like tissue, known as organoids (pictured). These have structures similar to those of the brains of human foetuses in early pregnancy. This week, Lancaster visited the MRC’s Clinical Sciences Centre (CSC) and explained that the cells of an organoid grow and develop in the same order as they do in a real, living brain, confirming them as a useful model for studying human brain development. The organoid pictured here contains cerebral cortex tissue (top right), which plays a role in consciousness. Below it are black cavities called ventricles filled with fluid that protects the brain – produced by the tightly-folded tissue of the choroid plexus (bottom left).