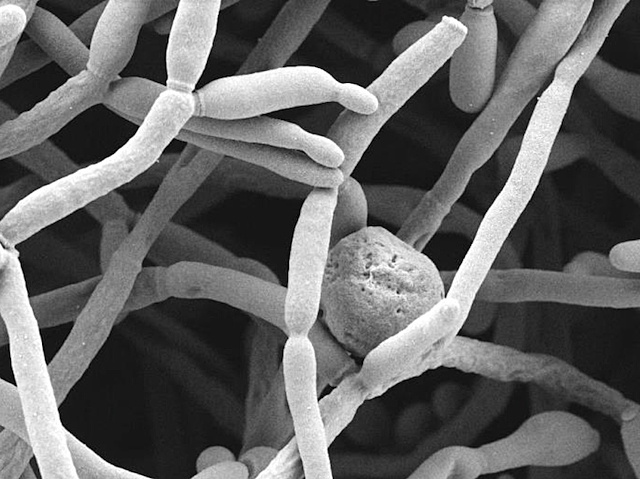 An unsuspecting insect flies into a spider web and moments later is encased in a flurry of webbing, perfectly packaged for devouring later. Spraying forth webs is a tactic also employed by immune cells called neutrophils. Neutrophils release web-like structures called neutrophil extracellular traps (NETs) to encase and destroy pathogens. Researchers investigated what happens to these web-wielding neutrophils during infection with Candida albicans – a fungus that can prove fatal in people with weakened immune systems. Using scanning electron microscopy they found NETs are indeed released to fend off Candida when it’s distributed in clusters. However when Candida forms a biofilm (pictured), neutrophils remain rounded and fail to release NETs (centre). Further delving revealed components in the matrix of the biofilm were responsible for disarming the neutrophils, allowing Candida to evade destruction. These insights bring us closer to improving treatments against Candida biofilms, which are notoriously difficult to combat.