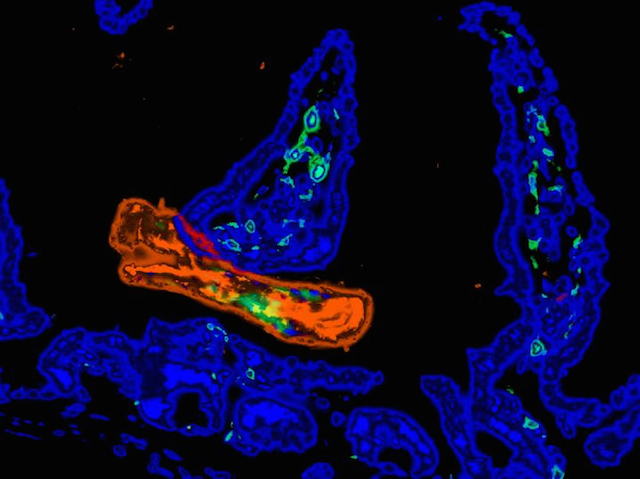 Fighting pathogens can require heavy artillery from the immune system, but such powerful weapons could potentially be harmful to our own cells. In mice, the protein RELMalpha works to protect them from the effects of their own immune defences. Researchers studied its role by challenging mice with hookworms, small parasitic nematodes. Shown here is a hookworm (in red), entering the small intestine of a mouse (blue); in green are macrophages, cells of the immune system. Mice with low levels of RELMalpha succumbed to severe hookworm infections, and while they overcame low doses of worms, they damaged themselves in the process. RELMalpha thus seems to dampen their immune response, striking a fine balance between fighting back and protecting the host’s own cells. Crucially, this protein has a human equivalent, resistin, which is likely to play a similar role, helping an estimated two billion people worldwide to cope with hookworm infections.