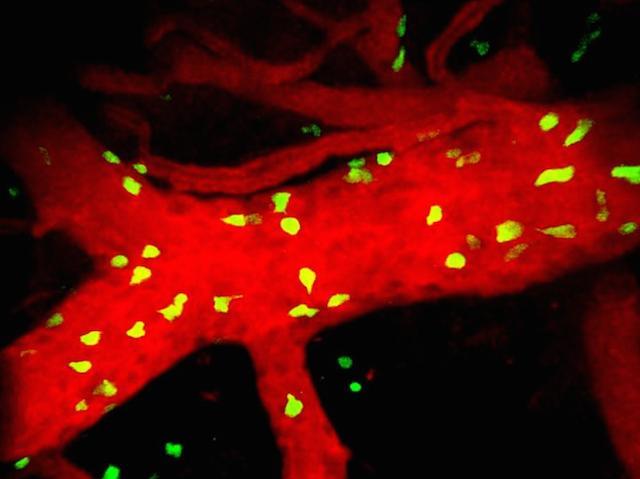 Parasites on the Brain

Cerebral malaria, in which the brain swells and bleeds, is a severe and often fatal complication of infection with malaria-causing Plasmodium parasites. Between 15 and 30 percent of sufferers who develop cerebral malaria will die from this condition, while a further 10 percent will experience long-term neurological problems. But what triggers this cerebral disease in some malaria victims is unclear. To gain insights into the condition, researchers have now examined the brains of mice with Plasmodium-induced cerebral malaria. They discovered that parasite-targeted immune cells called T cells (green) accumulate along the blood vessel walls of the animal’s brains (red), where fragments of the parasite are present. Such heightened immune activity prompts leakage from the vessels and subsequent brain cell death. Encouragingly, however, the researchers also found that injecting the mice with antibodies that prevent T cell accumulation gave the animals a better chance of survival.