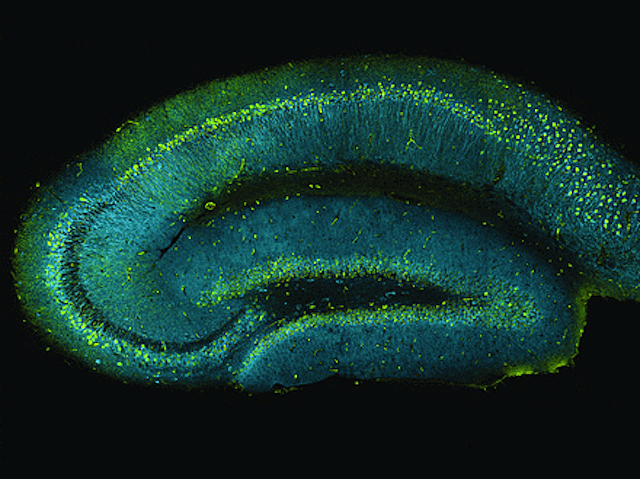 It’s well known that people with an inherited genetic condition called Gaucher disease also have an increased risk of developing Parkinson’s disease. But it’s not been known why this is. Now research in mice suggests the missing link is the build-up of a fatty molecule, called glucosylsphingosine. This accumulated in the brains of young mice engineered to have a Gaucher-like condition. The image shows a region of a mouse brain called the hippocampus, with glucosylsphingosine in blue. Over time, as the mice aged, the build-up of glucosylsphingosine was accompanied by the clumping of a protein, called alpha-synuclein (yellow). These clumps are a hallmark of Parkinson’s disease. This accumulation and clumping may also happen in the brains of people with Gaucher disease, who are known to have mutations in an enzyme which breaks down fatty molecules. The researchers suggest that these enzymes could be targeted by future treatments for Gaucher disease.