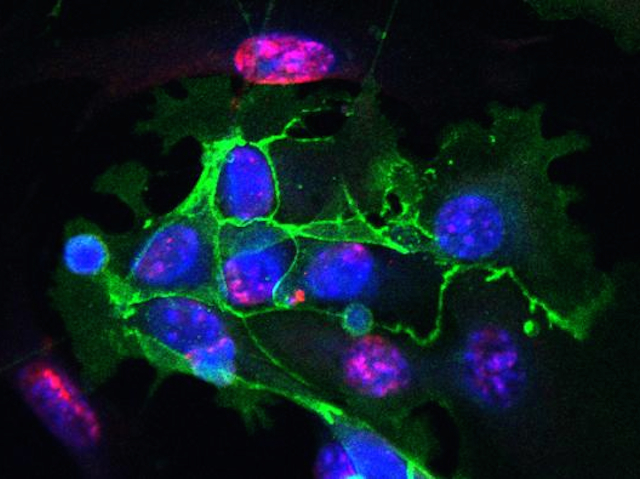 Idiopathic pulmonary fibrosis (IPF) is a rare disease affecting older people where lung tissue becomes scarred, making it extremely difficult for the patient to breathe. When looking at the lung tissue of patients with IPF, researchers saw that cells within the lungs tiny sacs, the alveoli, had molecules indicative of cellular ageing or senescence. Here green fluorescence highlights lung tissue in mice, with cells undergoing senescence in red, and cell nuclei stained blue. Senescence is thought to impact lung function by preventing damaged lung cells from dividing and replacing old cells, and by causing the production of molecules that induce tissue scarring. In other therapy areas such as cancer, there are drugs that specifically target senescent cells. When using these drugs on IPF tissue, researchers saw a decline in various molecules usually present, helping to prove that cellular senescence plays a big role in the development and progression of IPF.