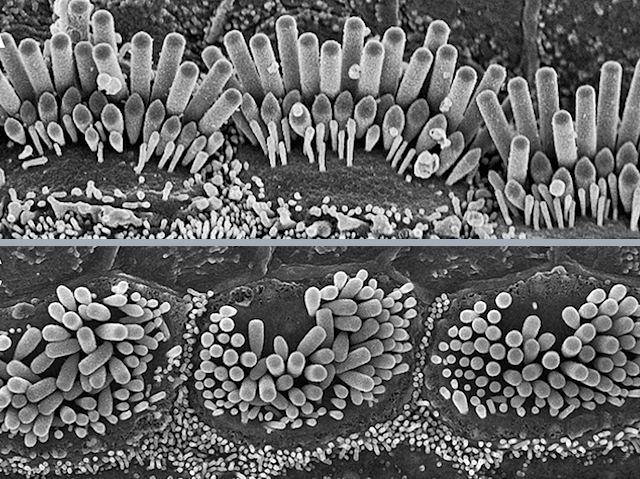 Whatever noise you can hear right now is thanks to tiny ‘hairs’ inside your ears, called stereocilia. They sense vibrations caused by sound waves coming into the ear, and send nerve signals into the brain which are then interpreted as speech, song or anything else. Stereocilia are normally arranged in clumps in a regular step-like pattern, short to tall – seen here in the inner ear of a healthy baby mouse (top). But the stereocilia in mice with a fault in a gene called SorCS2 look very different (bottom). Rather than growing in neatly arranged rows, they’re disorganised and chaotic, with longer hairs growing in the middle rather than at the back. As might be expected from such chaos, these animals are profoundly deaf. By studying the role of SorCS2 in the growth and development of stereocilia, scientists hope to find clues explaining why some human babies are born deaf too.