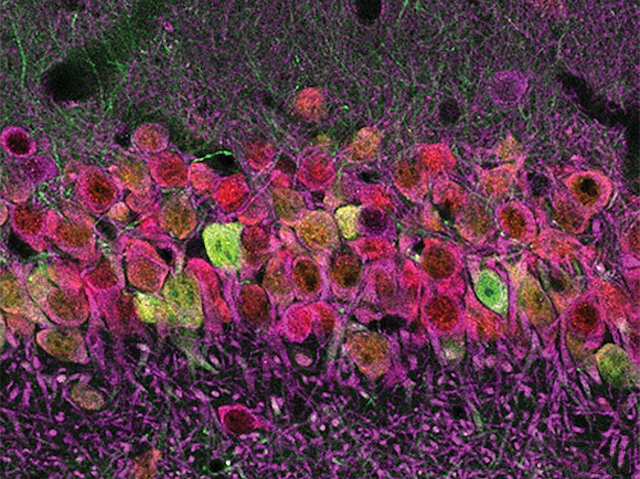 Bonding, breast milk and brains – the hormone oxytocin has a finger in all of these pies. During childbirth oxytocin levels surge in a baby’s brain, affecting its development. Researchers now dig deeper to find out how oxytocin affects nerve cell development. Imaging mouse brain slices revealed oxytocin binds to particular nerve cells (green) in a brain region called the hippocampus (pictured). Hippocampal nerve cells fall into two groups: excitatory and inhibitory. Growing these cells in a dish and exposing them to a burst of oxytocin caused changes specifically in the excitatory cells. They made fewer extensions and contacts with other nerve cells. Oxytocin it seems maintains the balance between inhibitory and excitatory nerve cells by reigning in the development of the latter. As disrupting oxytocin signalling has been linked to autism, it may be that disturbing the fine balance in nerve cell development is involved.