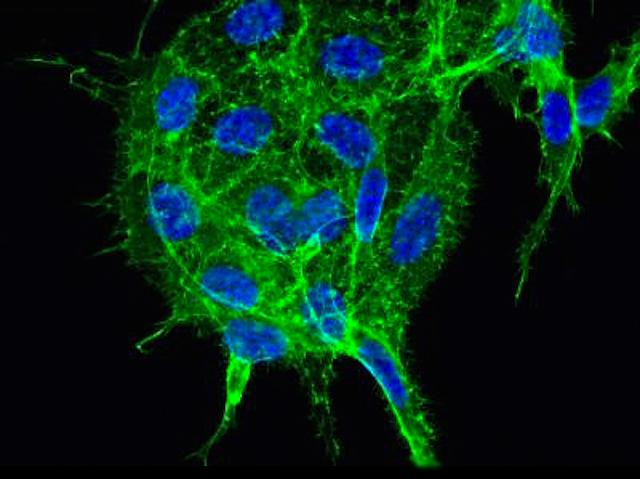 Over 30% of human cancers involve mutations in the Ras family of genes, so inhibiting their activity is a key goal for cancer biologists. Ras genes encode crucial signalling proteins, involved in many important processes, from metabolism to cell proliferation. Although Ras proteins have proven difficult to target directly, identifying the molecules they interact with could provide an alternative solution, and recent research suggests that another signalling protein, known as RIOK1, could be a promising candidate for action. This protein is known to be over-expressed in some cancer types, while tumour growth was reduced after breast, colorectal and lung cancer cells (pictured, with nuclei in blue) were genetically-modified to prevent production of RIOK1. As RIOK1 belongs to a family of proteins which are already targeted by some cancer treatments, researchers believe that designing specific inhibitors to block the function of RIOK1 could be possible, suggesting a potential therapeutic solution.

Today is World No Tobacco Day