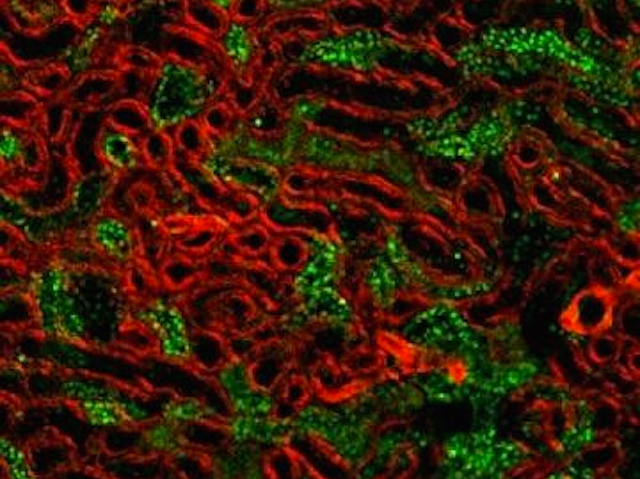 Over 500 million adults suffer with chronic kidney disease worldwide. With an increase in conditions such as diabetes and obesity, as well as an ageing population, more people are at risk. When looking into mechanisms involved in renal failure caused by ischaemia [insufficient oxygen], researchers found that kidney damage could be prevented in young rats by ischaemic preconditioning – short periods of restricted oxygen that build up tolerance against further ischaemia. Under these conditions, ‘weaker’ mitochondria (the cells’ ‘batteries’) within the kidney tissue were destroyed by the cells’ quality-control system (autophagy), leaving only healthy mitochondria. But in older rat kidney there’s an increased level of acetylated proteins (shown here in green) and the ‘weaker’ mitochondria aren’t cleared up and so accumulate, preventing protection from ischaemia. This information provides insight into why treatment can fail to help older people with kidney disease, and could aid development of more targeted therapies.