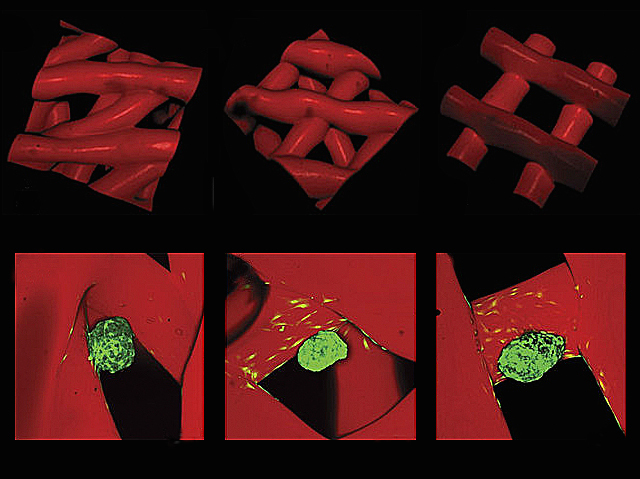 Ovarian cancer and the treatment of it may leave a woman without functional ovaries, which may cause premature menopause and infertility. Synthetic replacement ovaries is one treatment option that scientists are investigating, and in mice, there has already been some success, and live births, from implanting follicles – the hormone-producing ball of cells that surrounds and matures each egg – encapsulated in protective biocompatible gel beads. However, for such synthetic ovaries to work in humans, they would need to be bigger, contain more follicles, and have a blood supply. Using 3D printing technology, scientists are thus designing and building gel-based meshes (red) of different formats (three are shown) to see which will provide the best support for the follicles (green) yet enable blood vessel infiltration. Encouragingly these follicle-containing meshes have now been implanted in mice, where they became vascularised, restored ovarian function, and enabled the birth of live pups.