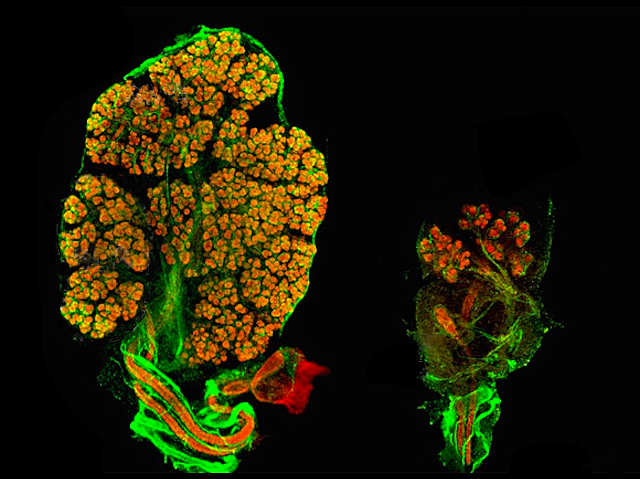 At the first whiff of chocolate cake our mouths fill with saliva. The slippery chemical mixture gets ready to break down food and ease tasty morsels down our throats. Salivary glands (which produce saliva) usually develop in the womb from stem cells, and scientists studied these mice glands to figure out how it happens. The healthy gland on the left has bundles of acinar cells (artificially-coloured red), which help to secrete saliva, connected to green-coloured ducts. The gland on the right formed from stem cells lacking a gene called SOX2 and, although its ducts have formed, the vital acinar cells fail to grow. Nerves surrounding salivary glands in both humans and mice can control SOX2. Knowing this, scientists plan to develop treatments to regenerate acinar cells later in life, making the idea of repairing salivary glands, as well as similar exocrine glands in the pancreas, much easier to swallow.