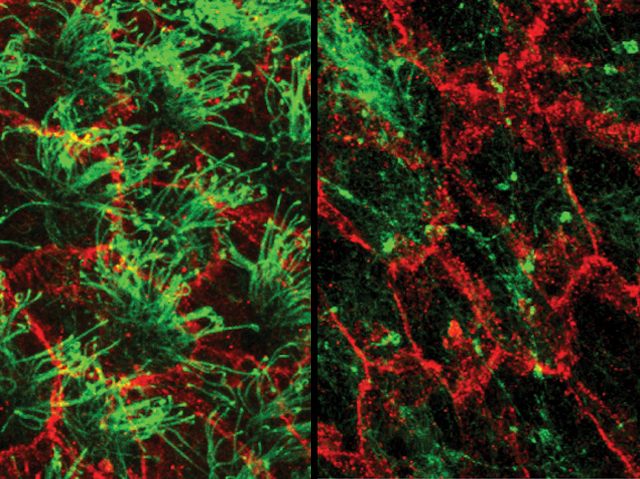 Your lungs are lined with cells coated with tiny hairs, known as cilia. They beat with a whip-like motion, propelling moisturising mucus around the airways. Cilia are also found on cells in other fluid-filled spaces, such as cavities in the brain known as ventricles and the fallopian tubes in the female reproductive system. Faulty cilia are implicated in several human lung diseases, including cystic fibrosis and asthma. And people with a disease called primary ciliary dyskinesia (PCD) suffer from excessive fluid in the brain, lung problems and infertility. The image on the left shows cells lining a brain ventricle in a healthy mouse, with the delicate cilia highlighted in green. The ventricle cells on the right are from an animal lacking a gene that makes a protein called CEP164. These mice have many of the same problems as people with PCD, suggesting that this gene is involved in the condition.