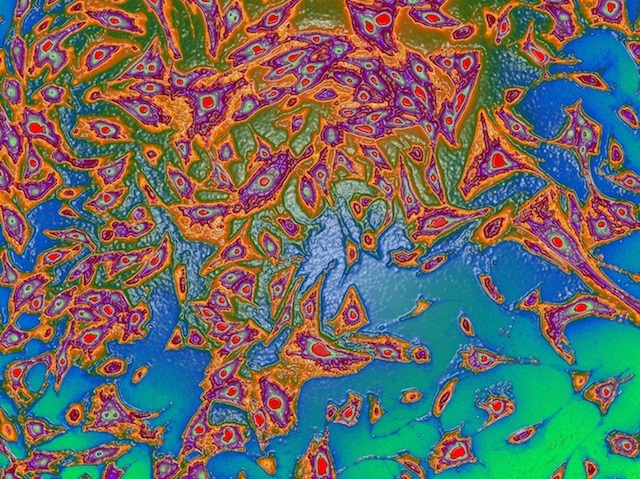 Blood vessel cells treated to reveal the amount of calcium inside

Although it might be worthy of an appearance on Blue Planet, this isn’t an aerial photo of a brightly-coloured coral reef. Instead, it’s a collection of blood vessel cells that have been treated to reveal the amount of calcium inside. If they were inside a person rather than in a plastic laboratory dish, then the high calcium levels in these cells would be contributing to high blood pressure (hypertension), which significantly increases the risk of having a heart attack or stroke, vascular dementia, kidney disease and more. Similar to the way that calcium in our bones makes them stiff and strong, excess calcium inside blood vessel cells makes them tough and inflexible, causing vessels to stiffen and blood pressure to rise. Nearly a third of adults in the UK have hypertension but many don’t receive proper treatment, so studying this 'Great Calcium Reef' could provide new clues for future therapies.