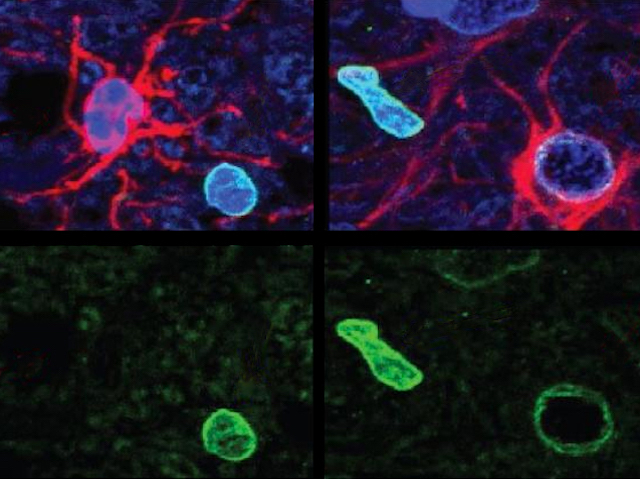 Targeting 'zombie-like' brain cells could be a new avenue to treat Parkinson’s disease. This incurable condition affects around 10 million people globally, impairing their ability to move and walk. It begins when neurons in the brain that co-ordinate movement become damaged. These neurons are supported by star-shaped cells called astrocytes (top row, red). But astrocytes can harm the very cells they support, by entering a zombie-like state, called senescence. Astrocytes in senescence lose a specific protein (labelled green, bottom row). Nearby healthy cells retain this protein. The senescent astrocytes cause inflammation, damaging the critical movement neurons. Brain tissue taken from dead patients with Parkinson’s had elevated levels of senescent astrocytes. In this study, researchers stimulated astrocyte support cells in the brains of mice to enter senescence. These mice developed difficulty moving, as in Parkinson’s disease. But treating them with a drug to destroy senescent cells prevented the development of symptoms.