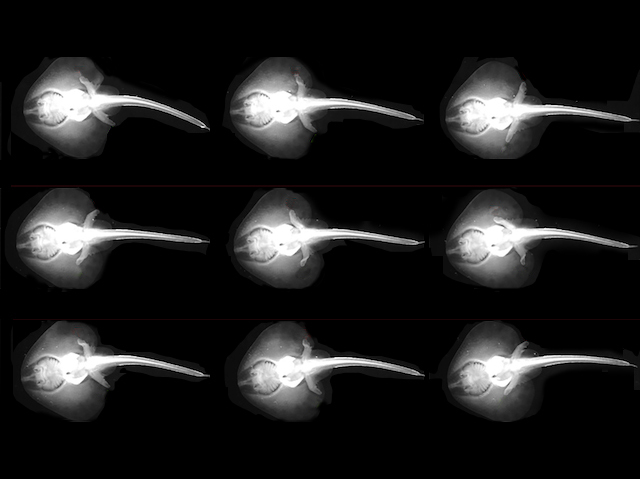 While seemingly straightforward, walking is a complex behaviour, requiring an elaborate circuit of motor neurons to activate muscles in a coordinated fashion. We share this means of locomotion with other terrestrial vertebrates and, more surprisingly, with some cartilaginous fish. Little skates (Leucoraja erinacea) swim with their wide pectoral fins but can also use their pelvic fins to walk along the seabed, alternating left and right limbs, as shown in these video frames. The neural circuits responsible for moving their fins share many similarities with those controlling the limbs of terrestrial vertebrates, and both are set up by shared regulatory genes, Hox6/7 and Hox 10. Comparing the genes, anatomy and behaviour of skates and other vertebrates suggests that the basic genetic and neural elements needed for walking have an ancient evolutionary origin, and offers a new opportunity to learn more about how neural circuits for motor patterns are put together.