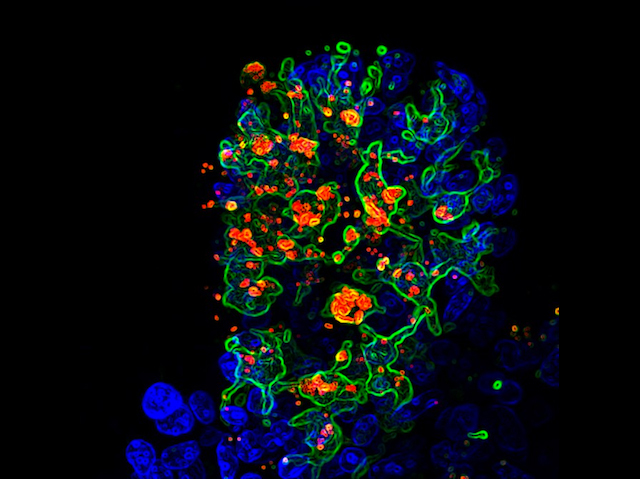 Our bodies are home to a whole universe of microscopic life. This ‘microbiome’ consists of not just bacteria, but also a less-famous mycobiome component: fungi. Fungi do important jobs for us like processing food, but left unsupervised they can cause trouble. It has recently become clear that fungal infection plays a role in some cases of inflammatory bowel disease (IBD), which has led researchers to investigate the body’s natural antifungal tactics. A new study has revealed that our immune system has special cells – catchily named CX3CR1+ mononuclear phagocytes (pictured in green) – that sit in the gut lining (blue) and devour troublesome fungi (red). The study found that mice lacking CX3CR1 were defenceless against fungal infection and developed IBD symptoms that could only be alleviated with antifungal treatment. This raises hopes that for IBD patients with faltering CX3CR1 defences, a similar fungus-fighting approach might provide relief.