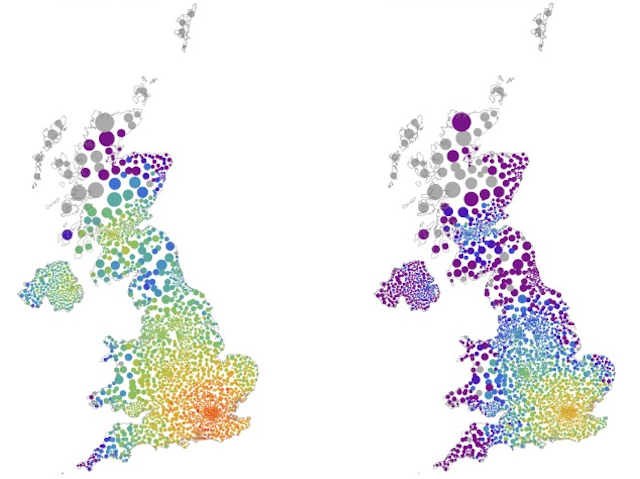 Viruses like influenza often spread very quickly – passing from person to person in bustling cities and reaching remote areas as infected commuters return home. A recent BBC documentary examined the spread of a 'virtual' pandemic, using a phone-based app to simulate infection in a small town in the south of England, then watching as it bloomed across the UK after taking hold in London. A team of mathematicians are still carefully analysing the data – producing these striking infection maps. The spread of colours shows advancing weeks after the initial infection (red, week 1; purple, 14+ weeks; grey, not affected) – at around seven weeks (green dots left), the virus has spread to densely populous areas of England, Wales, Scotland and Northern Ireland. The simulation on the right shows how hand washing vastly reduces the risk of infection, stemming the outbreak during the first week (red) and slowing down the spread, buying time for emergency teams and potentially saving many lives.