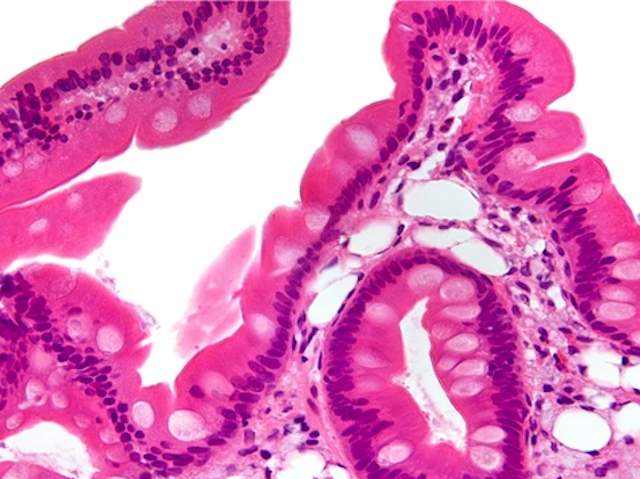 The bacterium Tropheryma whipplei is widespread, yet only causes a serious illness – Whipple’s disease – in just one in a million people. Symptoms include diarrhoea, weight loss, and abdominal and joint pain, which can be cured with antibiotics. This slice of intestine comes from a patient with the disease, and shows that the myriad tiny projections called microvilli that normally coat the gut surface (here stained bright pink) are missing, and there are abnormal fat deposits (the white blobs). As only a few are susceptible there’s been speculation for decades that these people are genetically different, and a number of families showing inheritance of the disease have indeed been found. Now, in one such family, researchers have pinpointed an affected gene, IRF4, which is vital for a normally functioning immune system. It’s possible that other families with Whipple’s Disease are afflicted with different genetic faults that affect their immune response to T. whipplei.