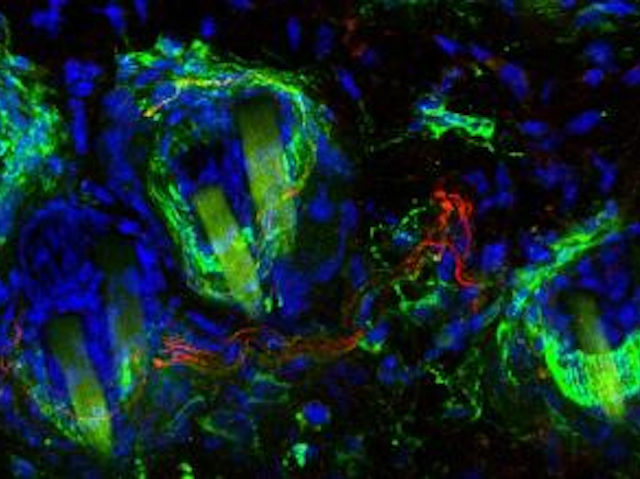 For patients suffering from neuropathic pain, even the slightest touch can cause terrible suffering. Thankfully, recent research has identified neurons in the skin responsible for this sensation, and a possible means to deactivate them. Mice suffering from neuropathic pain no longer seemed to experience pain after gentle touches when a specific population of neurons was eliminated: in the mouse skin pictured, these cells are shown in green, surrounding the hair follicles (visible as light green streaks). Researchers also developed a light-sensitive chemical that specifically binds to these cells and, when illuminated with a laser, destroys them. Without altering other sensations, this technique prevented mice from feeling pain after light touches for several weeks, until the nerve endings regenerated. Although still far from similar trials in humans, these discoveries pave the way for a greater understanding of the neuronal pathways underpinning neuropathic pain, and suggest a new possibility for future therapies.