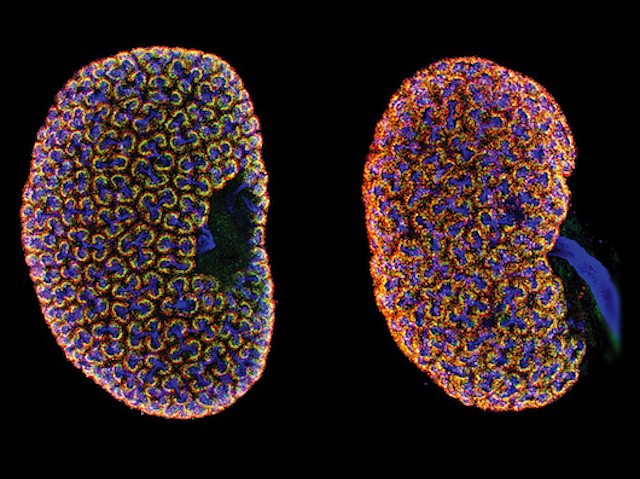 You’ve got around 2 million of them – nephrons, tiny filters in your kidneys that clear out the waste products in your blood. The right numbers of nephrons are produced during development by cells called nephron progenitors. A pool of these progenitors is maintained, with a steady stream maturing into different nephron cells. This fine balance is sustained by signalling molecules called Wnts. Researchers dig deeper by focusing on Wnt11, which accumulates at the tips of developing kidney branches where nephron progenitors live. Fluorescent imaging of kidneys from mutant mice lacking Wnt11 (pictured, right) revealed that the progenitors lost their sense of orientation, revealed by the polarised distribution of the protein desmin (green) within these cells being disrupted compared to normal kidneys (left). Mutants also depleted their pool of progenitors faster, resulting in half the number of nephrons and smaller kidneys. Wnt11 is therefore a major player in kidney development.