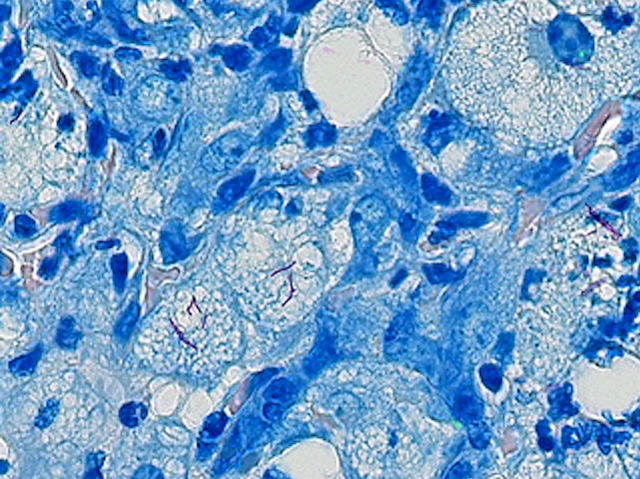 Tuberculosis (TB) affects about a third of the world’s population. Seven lineages of the causative bacterium Mycobacterium tuberculosis (Mtb) are composed of different strains, which vary according to characteristics like drug sensitivity. A study of 124 TB patients in Brazil and the more than 700 individuals who’d been in close contact subdivided a lineage of Mtb into two strains, high (HT) and low (LT), according to how effectively they’d transmitted disease. Now the team has looked in mice at the lung damage the two strains cause. Immune cells called macrophages filled with lipid droplets are a hallmark of Mtb infection. In mice with Mtb-HT discrete collections of macrophages (granulomas) developed with fewer lipid droplets and containing fewer bacteria (the black squiggles seen here centrally) than the widespread inflammatory macrophages found with Mtb-LT. How the immune system interacts with Mtb apparently leads to distinct patterns of bacterial growth and damage, which in turn underlies the subsequent differences in infectiousness.