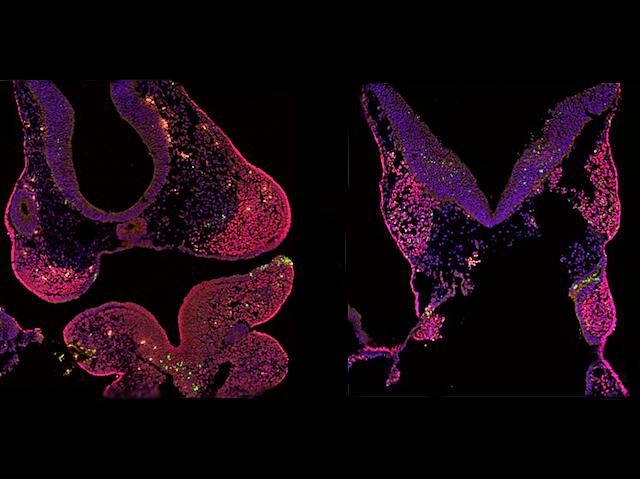 Like a noticeboard filled with posters, the outer surface of a cell is littered with proteins conveying information to surrounding cells. Many of these proteins are pinned in place by lipids, specifically GPI-anchors. Defective GPI-anchor production in humans, as a result of genetic mutations, causes seizures, cleft palates and altered facial features. Researchers hone in on mutations in the gene pgap2, which is involved in GPI production. Mouse pgap2 mutants had reduced amounts of GPI, as well as cleft lips and palates. Imaging developing mouse tissues using fluorescence microscopy (pictured) revealed clear defects in mutants (right) in the tissues that would go on to become the face and brain compared to normal mice (left). A closer look revealed excessive cell death within these tissues in mutants. These insights bring us a step closer to understanding the mechanisms that underlie diseases caused by the defective production of GPI anchors.