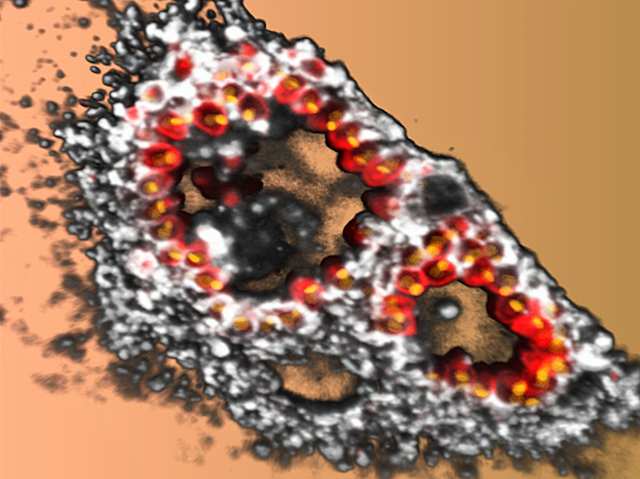 Caused by parasites transmitted by biting phlebotomine sand flies, leishmaniasis is a widespread disease with several forms, either leading to severe skin complaints or seriously damaging organs, especially the spleen and liver. Upon infection, white blood cells called macrophages engulf the Leishmania parasites. Yet, rather than being destroyed, the parasites thrive, reproducing within the macrophages, inside compartments known as vacuoles (as shown, in a 3D reconstruction based on microscopy images, with a macrophage in white and parasites in red). Recent research suggests this process involves host V-ATPases, complex proteins which control vacuolar pH by shuttling protons across compartment membranes, alongside many other functions. One part of these proteins in particular, upregulated by infection with Leishmania parasites, appears to be important: without it, vacuoles are smaller and parasites become vulnerable to the immune system’s inflammatory response. Interfering with this protein domain could thus open up new possibilities for tackling intracellular parasites.