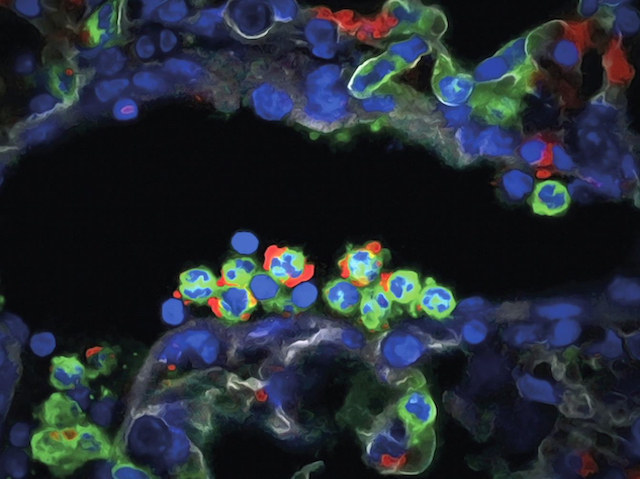 The immune system’s first responding cells spontaneously disarm within hours of being deployed to fight infection. This keeps the immune system in check and stops it from damaging healthy tissue. These cells, called neutrophils, contain a defensive armament of highly toxic proteins and can form trap-like structures. Together, these proteins and traps aim to destroy invading bacteria, but they can also damage healthy tissue, particularly in the lungs. It’s known that over activity of the immune system can play a key role in cancer, heart and neurodegenerative diseases. New findings show that the neutrophils’ protein stores gradually become depleted, and the cells lose their ability to create traps. This in-built mechanism keeps levels of inflammation under control and protects vulnerable tissue. Here, neutrophils (green) are infiltrating the lung tissue of an infected mouse. The mechanism was also shown to occur in human cells and patients with pneumonia.