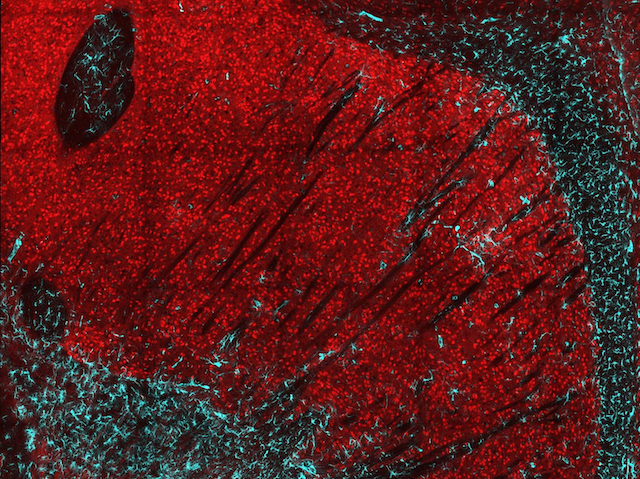 New angle on the role of huntingtin protein in Huntington's disease

Huntington’s disease is a rare and incurable, neurodegenerative disorder characterised by uncontrolled movements, changes in mood, and declines in reasoning and memory. The causative mutation – which creates an abnormally extended version of the huntingtin protein – was discovered decades ago, yet the protein’s normal function and how its mutation leads to pathology remain unclear. Because huntingtin interacts with many cellular proteins, its abnormal extension was widely considered to be a gain-of-function mutation – one that causes excessive recruitment of interacting proteins resulting in toxicity. But recent work reveals that loss of huntingtin function in mouse brain striatal neurons (red) can cause Huntington’s-like pathology and symptoms too, including impaired neuronal survival, infiltration of other brain cells called glial astrocytes (cyan), and movement and coordination deficits. This new view of Huntington’s pathology suggests that current therapies aimed at suppressing the mutant protein may in fact be counterproductive and that a new drug design perspective might be required.