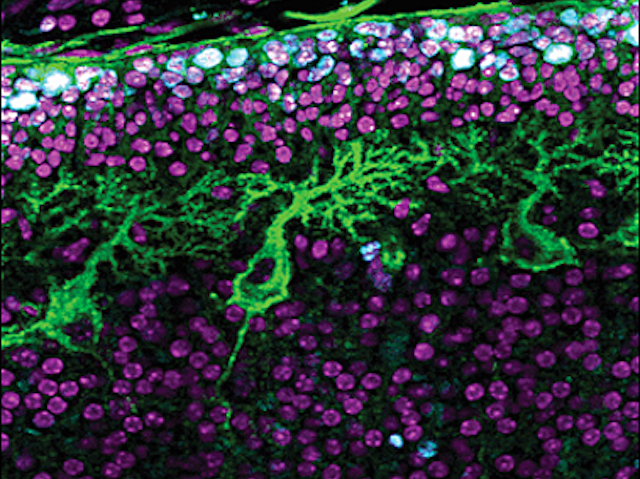 Different areas in our brain are tied together by finely-tuned and well-orchestrated networks of connections. Located at the back of the head, the cerebellum is best known for coordinating our movements, but studies have also linked developmental disorders such as autism to disrupted cerebellar networks. Scientists recently set out to better understand this link by focusing on Purkinje cells, neurons that are only found in the cerebellum and play a vital role in its functioning. The team found that absence of the protein called p75 neurotrophin receptor in mice triggered a cascade of effects; it firstly disrupted the cell cycle [the process of dividing] of neurons that provide input to Purkinje cells (shown here in green in a young mouse), which in turn affected Purkinje cell functioning, and ultimately resulted in learning deficits that carried on into adulthood. These findings show us how seemingly minor errors to our well-orchestrated brain circuits can have widespread repercussions.