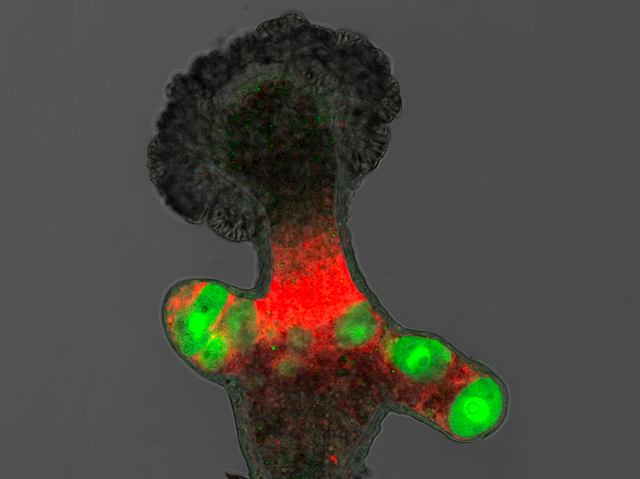 Clues to treating infertility from jellyfish

In most animals, including human beings, the production and segregation of germ cells – the cells that will give rise to sperm or eggs – occurs in early embryonic development and never again. By contrast, jellyfish, such as the North Atlantic Hydractinia pictured, make germ cells (red) throughout their entire lives, and thus can develop sperm or, in this female’s case, eggs (green) forever. It turns out that jellyfish maintain a population of stem cells with the capacity to become either somatic (body) cells or germ cells as required. Despite this stark difference in reproductive biology between humans and Hydractinia, both require essentially the same gene for germ cell production, which gets switched off in humans and remains active in jellyfish. This common genetic mechanism and the endless ability of jellyfish to regenerate their reproductive systems could have implications for the study of certain infertility issues in humans, researchers believe.