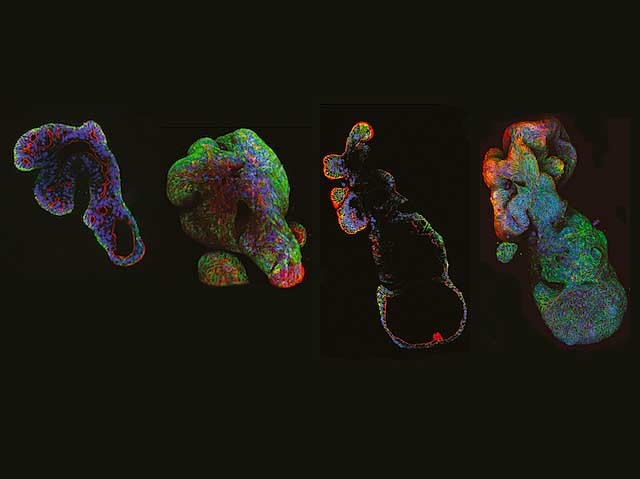 Organoids and tumouroids are 3D tissues grown in the lab that mimic real organs and tumours. They’re made by growing cells in solid support structures (matrices) – a process that doesn’t scale up well. Now researchers develop a system that makes it easier to grow these 3D mini-tissues from the human large intestine in an easily scalable way – low-viscosity matrix (LVM) suspension culture. Healthy and cancerous human tissue samples were grown in LVM suspension to form organoids and tumouroids. They were similar in shape to those from solid matrices, as revealed by confocal fluorescence microscopy (pictured), which captured slices through each organoid (first and third) that were then computer graphically ‘stitched together’ into 3D structures (second and fourth). The tumouroids also showed the same genetic changes found in colorectal cancers in humans. This system therefore presents an easier way to scale-up studies of the intestine in health and disease.