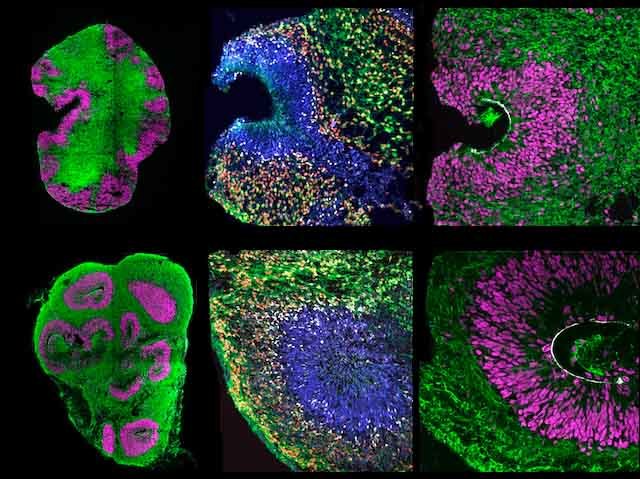 Understanding the brain is a monumental task, but some of its properties can be investigated using brain organoids, self-organising aggregates of cells acting as model brains for research. Put simply, making organoids involves mixing human induced pluripotent stem cells (iPSCs) in a fluid culture, in conditions that encourage them to differentiate into brain cells. How you mix them is critical, as the mechanical forces experienced by iPSCs affects their behaviour. Most organoids are made using orbital shaking, with cell cultures placed in plates that tilt and rotate, but different results are obtained with vertical mixing, pressing cultures up and down. In vertically-mixed organoids (top), neural progenitors (in magenta or blue) surround the neurons they give rise to (in green), while orbital shaking produces the opposite pattern (below). Inverted organoids from vertical shaking also contain more GABAergic neurons, relevant to Alzheimer’s disease, so could provide better models of some neurological diseases.