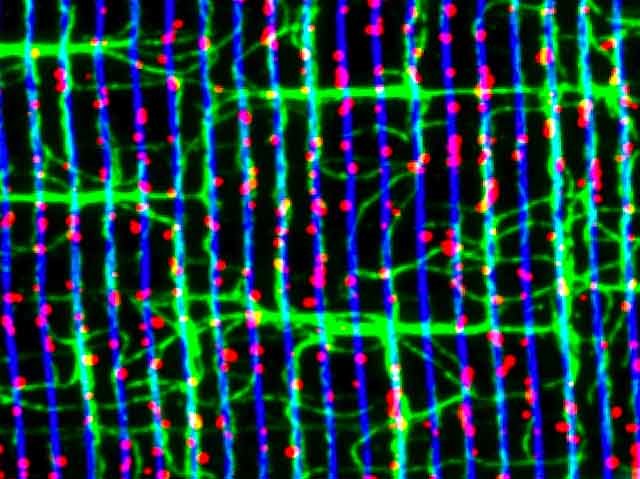 In a hurry for a train, stretchy regions in our leg muscles called sarcomeres contract and expand to pull our bones along. Zooming in further on this mouse muscle, scientists follow molecules on their own journey – messenger RNAs (highlighted in red) are carrying genetic information, used as templates to build proteins. A technique called RNA FISH, spots RNAs travelling from the muscle fibre’s nuclei (where they’re made) to z-disks (blue) at the boundaries between sarcomeres along a muscle myofibre. The RNAs zip along the muscle’s network of microtubules (green) like tube or metro lines (although a billion times smaller). Scientists see patterns of different RNAs at the z-disks, clustering like cosmopolitan crowds of commuters at train stations – perhaps as a way to spread a variety of useful proteins along our muscles, which may be disrupted in myopathies.