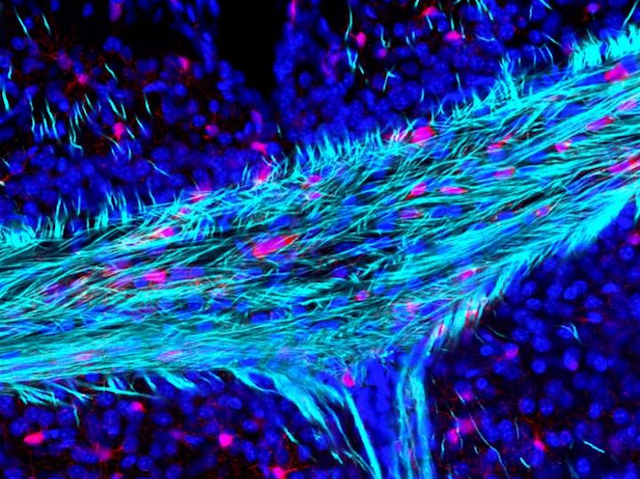 Much like supercomputers, ours brains achieve complex tasks by doing simpler ones quickly. Speedy signals sent between neurons help to control the body, create and access memories, and quickly interpret the outside world. One secret to the brain’s speed lies not in the neurons themselves, but in what’s wrapped around them. Pictured here under a high-powered microscope, a waxy coating called myelin (highlighted in cyan) surrounds neurons in a mouse’s brain. Myelin provides support and protection, like a bandage wrapped around a finger, but also acts as an electrical insulator, allowing ions to rush through insulated sections of neurons by a process called saltatory conduction. Researchers discovered that ageing can affect genes inside oligodendrocytes, cells which replace myelin in the brain (pink), slowing down its communication. Rejuvenating these cells, may hold hope for treating conditions like multiple sclerosis and Alzheimer's disease.