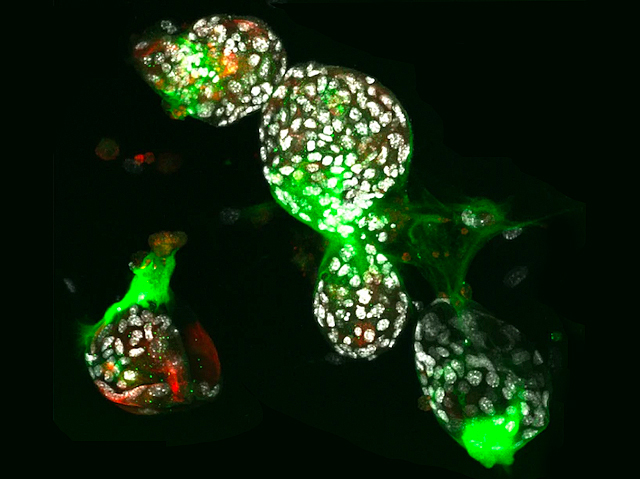 Before cancer takes root, pre-cancerous changes lay the groundwork. So, before pancreatic ductal cancer develops, special cells called acinar cells change into immature ductal cells in a process called acinar ductal metaplasia (ADM). Maintaining acinar cells in their usual state is known to prevent tumours from forming. Researchers now investigate whether two small molecules that suppress the activity of enzymes involved in ADM could achieve this. When mouse acinar cells were grown in 3D matrices in the lab, they eventually reverted to an immature state, congregating into bulbous, duct-like structures as revealed through fluorescence microscopy (pictured). Adding either small molecule prevented this. Moreover, adding either small molecule to cells that had already undergone ADM appeared to reverse the process, as suggested by genetic and shape changes. The same effect was seen in human acinar cells grown in 3D matrices, revealing a potential therapeutic strategy for reversing changes that promote cancer.