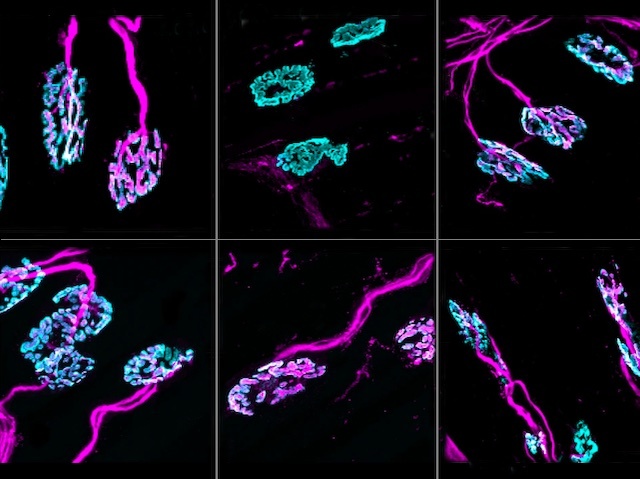 When nerves meet muscle during development, something special happens – connections called neuromuscular junctions (NMJs) form. Nerve damage can cause NMJs to lose their nerve connections (denervation). Rebuilding these connections (reinnervation) is difficult in humans. So researchers now investigate what's happening using mice. The nerve supplying a muscle in mice was either temporarily or permanently damaged. Fluorescence microscopy of healthy NMJs (pictured, top left) and of damaged NMJs examined after reinnervation (remaining panels) revealed the breakdown of the NMJ on the muscle side (cyan) after both permanent or temporary nerve damage, even three months later. Tracking reinnervation over time showed that multiple nerves (magenta) sometimes resupplied NMJs (bottom right). Together, this uncovers long-lasting changes in NMJs after nerve damage, which may not always reflect the NMJ failing to recover but instead reflect the NMJ trying to rebuild. Further research could shed light on how to encourage such changes for recovery.