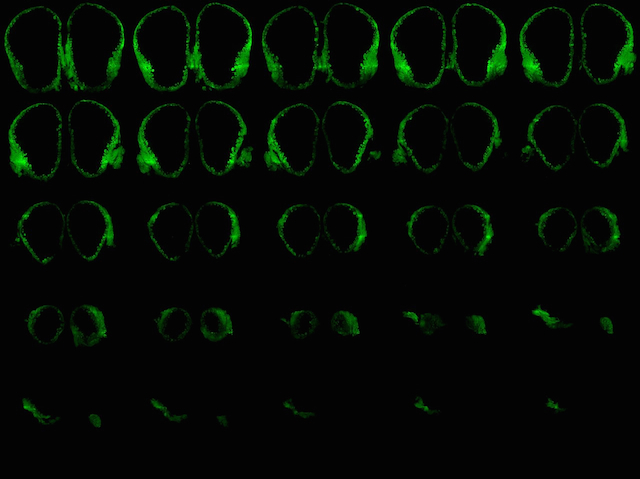 Our ability to identify particular smells, from sizzling bacon to rubbish bins on a hot day, is controlled by odorant receptor genes. Each olfactory sensory neuron – a nerve cell in the nose that detects and transmits odour information to the brain – uses just one of these genes. The odorant receptor not only determines the kind of smells the nerve cell will be sensitive to, but also in which of the thousands of round anatomical structures in the brain's olfactory bulb called glomeruli the nerve process will terminate. Thought to be topographically fixed, the positions of the receptor-specific glomeruli have now been examined with serial two-photon tomography. Pictured are scans taken at different depths through both mouse olfactory bulbs, with the nerve processes of all olfactory sensory neurons fluorescing in green. This study revealed that positions of receptor-specific glomeruli are more variable than previously thought, and some vary more than others.