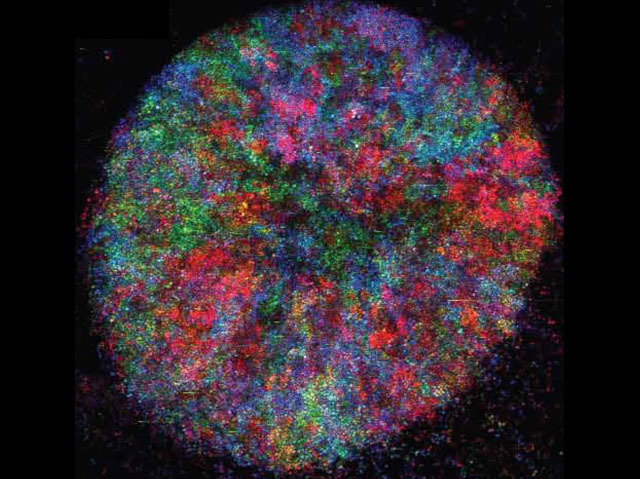 This bustling yeast colony is the ultimate example of giving back to the community. Artificial fluorescent proteins act like beacons showing which yeast cells are producing histidine (blue), leucine (green) and methionine (red). These are metabolites, chemical food that yeast often produce for themselves but also, as researchers found, offer to their neighbours. Over generations yeast randomly lose the ability to produce different metabolites (due to genetic changes) – this colony has become a bit like a busy market as yeast cells trade different metabolites to survive. Only a lucky few are producing their own red, green and blue-coloured metabolites (their overlapping colours appear as white dots). The rest must swap or die, such as the purple (red with blue) yeast cells clamouring around green leucine-producers. Researchers believe this is proof of cooperation inside sprawling colonies, another example of the resilience of yeast that often produce stubborn infections in humans.