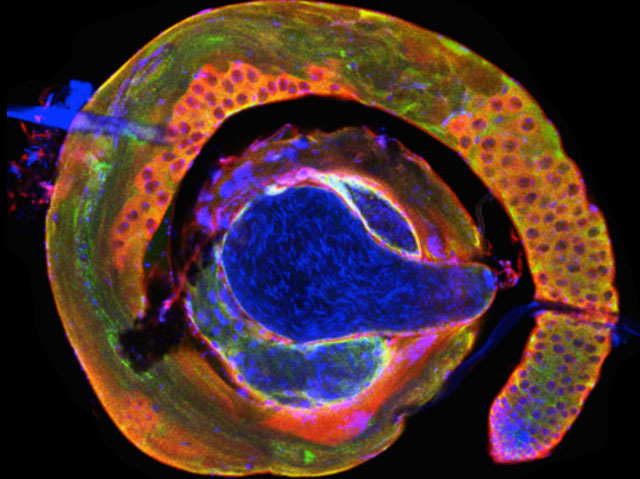 Many genes have unusual names, but one of the strangest is Piwi. It’s short for ‘P-element Induced Wimpy Testis' and comes from the scientist who first noticed the male fruit flies he was studying had unusually tiny testicles. They turned out to have a faulty Piwi gene, and faults in the human version– Hiwi – are implicated in testicular cancers. Luckily the fly testis in this microscope image – stained with dyes revealing DNA (blue) and proteins called VASA (red) and Tudor-SN (green) – is a normal size, packed with growing sperm cells. The protein made by Piwi is responsible for keeping ‘jumping genes’ (transposons) under control. These are virus-like stretches of DNA that can hop about in the genome, causing havoc. Although its function was previously a mystery, scientists have discovered that Tudor-SN works together with Piwi to keep a lid on transposons, stopping them from causing problems in the developing sperm.