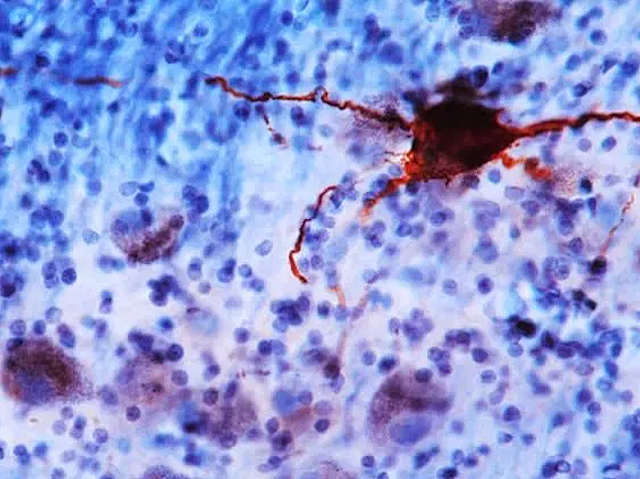 Alzheimer’s disease ravages the brain well before patients start to experience memory loss. In an ideal world, pre-symptomatic treatments could slow or even stop the eventual and irreversible degeneration of brain tissue. Unfortunately, these early stages can only be detected post-mortem, typically by looking for neurofibrillary tangles (shown in red in this brain section); these protein clusters are one of the earliest biological indicators of disease onset. However, scientists have recently shown that there may also be psychiatric indicators. Analysing post-mortem brains, the team found that individuals who hadn’t started experiencing memory loss but had neurofibrillary tangles in a particular brain region were more likely to have suffered from anxiety, changes in appetite, difficulties sleeping, and depression. Such symptoms aren’t necessarily causative, but may be a warning that the disease is picking up speed, so giving some hope of earlier diagnosis and even of new therapies to slow its onset.