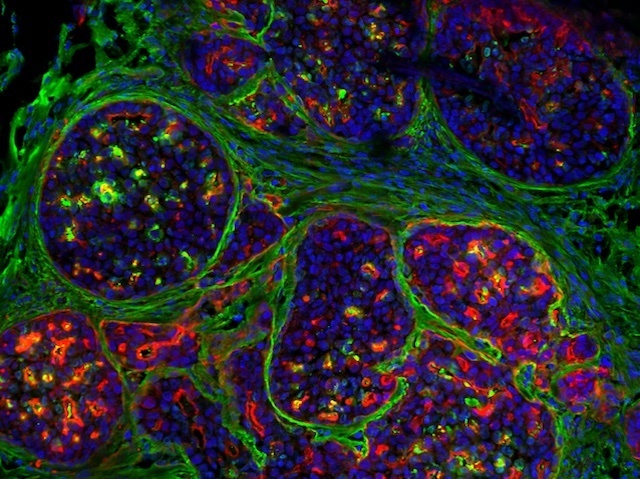 When confined to breast tissue, breast cancer tumours can usually be safely removed by surgery, but if they metastasise, spreading to other tissues, they become more lethal. In their non-invasive early stage, known as ductal carcinoma in situ (DCIS), the tumours are contained within a barrier called the basement membrane (pictured in green, around cancer cells in red, with nuclei in blue). To break through, cancer cells can use thin membrane protrusions, or filopodia, which probe the surrounding environment. Forming filopodia requires the protein myosin-X (MYO10), so tampering with MYO10 should reduce the risk of tumours escaping. Yet, contrary to expectations, tumours depleted of MYO10 are actually more invasive, because their basement membrane is weakened. Filopodia seem to contribute to building up the basement membrane, suggesting that MYO10 has a protective effect in the first stages of breast cancer, and that targeting it too early could in fact be harmful.