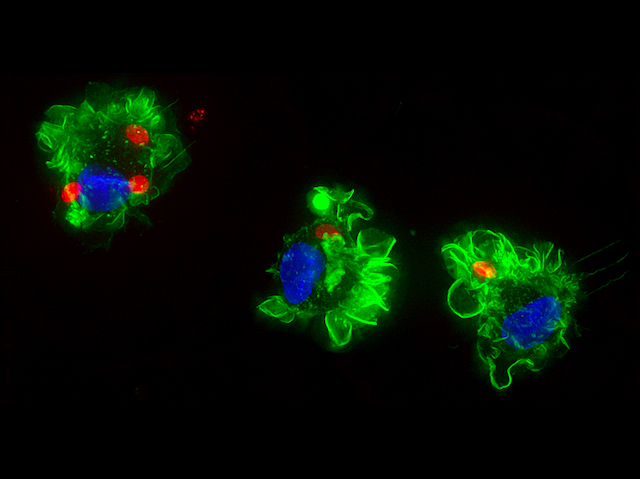 Estimated to infect around 30% of people worldwide, Toxoplasma gondii is a widespread parasite with a peculiar life cycle: it reproduces sexually only in its main hosts, wild and domestic cats, but can also infect and replicate inside other species, including humans. The ensuing disease, toxoplasmosis, can cause flu-like symptoms before settling in as a generally symptomless chronic condition, although it becomes more dangerous during pregnancy and for patients with weakened immunity. Toxoplasma’s superpower is its ability to hijack the immune system, infecting macrophages, which normally gobble up pathogens, then altering their behaviour. Infection with Toxoplasma (pictured, in red), changes gene expression inside macrophages (in green, with nuclei in blue), reprogramming them to become more mobile, so they themselves help to spread the parasites. Recent research revealed that Toxoplasma uses a protein called GRA28 to re-organise DNA in the macrophages’ nuclei, suggesting a new target for scientists investigating potential treatments.